I’m working with this iPhone X. Hopefully the sound comes out okay. I don’t have a gimbal. The batteries are gone. But anyway.

I just got off the phone today with a client of mine. Gorgeous couple. Husband and wife. Got a trade business. They came to me in January this year. Joined and just started in February.

Anyway, I just posted about this and they’ve gone from $50k a month to hitting $80K-$100K a month now just in five months. Actually did this about four months ago. They sent me a message saying “Hey, Casey. We’ve grown from $50K a month to $80K a month!” But they’ve consolidated that $80K-$100K a month, changing their lives.

Man, I love what I do! I freakin’ love it. Now when you can get a really good couple like this and you can help change their lives because they’re really good people. And I love helping good people become great. And yeah, I’m pretty stoked so I thought to get on and share it.

It’s a pretty unique situation and they’re in a remote area and they got a trade business. Done pretty good, you know. I think $50k a month so they’re pretty good operators but I wasn’t hitting the level that I wanted and wasn’t giving them that freedom that they wanted. So they sought me out.

Now, there’s plenty of coaches out there that specialize in trade businesses. And they could’ve gone with them but they came with me. And the reason why is that Add10 is non-industry specific.

So, I don’t do that industry-specific stuff. I focus on growing a business and predominantly adding anywhere from 1 to 10 million, you know, into one or three year period. That’s kind of my special spot there.

And so what these guys have done, they’re now getting into that million dollar mark
and what we want to do next is in rolling out a franchise model and franchise it and open up in different locations. So it’s gonna be really exciting for these guys to be
able to do.

When you start to grow your business by that much you can change your life very very quickly. And it could also bury you as well. But what we want to do and what’s happening with this lovely couple now is they’re making money. Yeah, they’re making clear money and they’re getting free time and they’re starting to live the dream.

So a couple of things, just quickly, that we worked on. Number one, the visibility on their financials wasn’t that good. So we set in place, I gave them a bit of a brief on what they needed to do to find an accountant that was going to be really good for them to set their business up so they had that financial visibility that a lot of business owners slack.

Because there’s, quite honestly, most business owners have an accountant that doesn’t really know their business. And so if you can find someone who really knows your business and can communicate with you really well, it’s a really an advantage. And then if you can get a bookkeeper in place that does it as well then you’re on top of your financials.

We also took them from a lot of that paper-based stuff to the apps and the cloud-based things plus a whole bunch of other things. We’re just getting into the marketing side now. We’re training the team, hiring new people and really submitting their brand positioning I suppose. And the marketing really starts to roll out soon. So it’s exciting times.

I just wanted to share it because I’m a big believer in these two. And yeah, there you go. Anyway let me see if I can interview them soon as one of the interviews that I do the, successful people that I work with. And yeah, obviously if we can share that with you.

Anyway, so well done guys. Hope you enjoyed this little Facebook live. Everyone that’s watching and it’s possible you can grow your business.

Oh, one of the key takeaways I got from that was they really enjoyed being in the group, in the community that I’ve got here at Add10. And in particular, talking with clever people not just in their industry but outside the industry.

Because when they can learn things from other industries that can bring it into the industry and they’re totally unique. They’re not writing the same emails, has the same looking website. They don’t have the same template stuff that, to be honest, put some people there. But you know those, I call them industry coaches, tells you to do this email or do this website or do this thing and everyone’s doing it.

Obviously. I’d like to bring something a little bit different to the market and these guys are doing it and they’re doing it really well.

So anyway beautiful brag to share and helping out the little guys here. You’ve seen some of my clients adding millions. These guys are on the way. So it’s nice to share that. You take care. Bye. 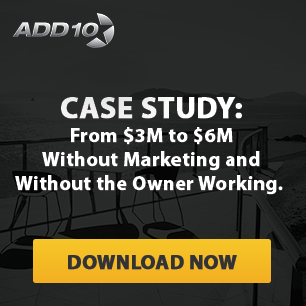 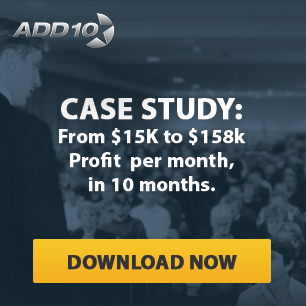 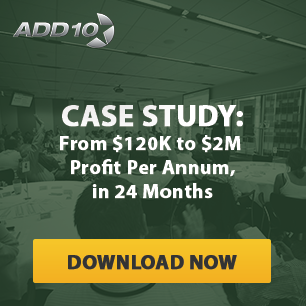 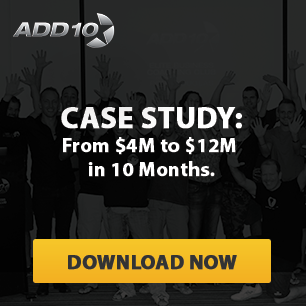 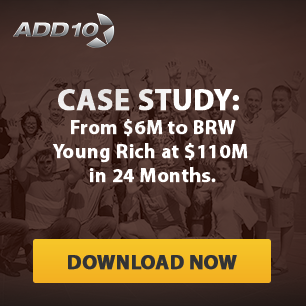